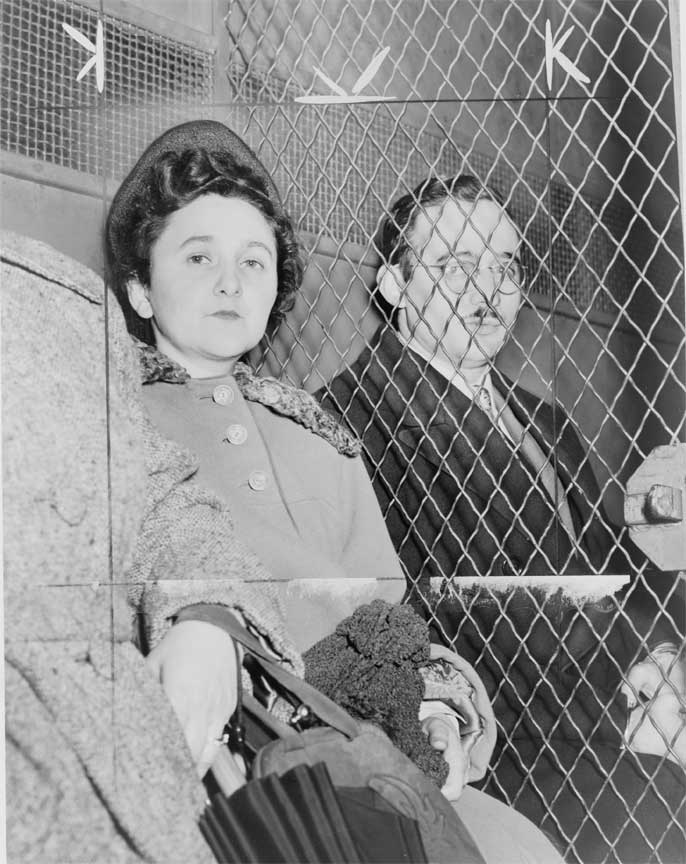 Julius and Ethel Rosenberg gained international notoriety for their arrest and subsequent execution for their roles in a Soviet Union Espionage plot to gain top-secret US intelligence regarding the Manhattan Project. Both originally from New York City, Julius and Ethel met in 1936 when they were both members of the Young Communists League, they were married in 1939. The following year, Julius Rosenberg joined the Army Signal Corps as a civilian electrical engineer at Fort Monmouth. In September 1942, Julius was recruited by Soviet NKVD, a secret police agency.

At the time, Fort Monmouth was a hub of communications and technological advancement. The army conducted sensitive, groundbreaking research on guided missiles, radar, and communications equipment there regularly. Julius was tasked with passing that classified information to the Soviets.

Over his time at Fort Monmouth, Julius was able to create an espionage network within the Manhattan Project. Through this network, he delivered secrets to the Soviets which aided their nuclear program. Ethel’s brother, David Greenglass, who was also a machinist for the Army, and his wife Ruth, were recruited into the spy network as well. In 1944 he was charged with top secret work on the Manhattan Project in Los Alamos, New Mexico. His work included creating molds for the high-explosive lenses used to detonate the plutonium core in the implosion bomb. In mid-1945 Greenglass sent Julius 12 pages of notes, as well as a rough sketch of an implosion type nuclear device, a piece of the atomic bomb. For this information he was paid $500. 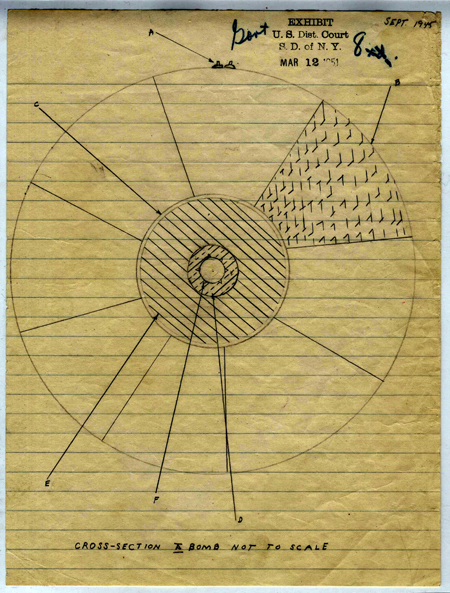 Julius Rosenberg left the Communist Party to avoid suspicion, however, he was fired from the Army in 1945 for his connections to the party.  It wasn’t until 1950 that Julius was arrested, along with many of his co-conspirators, for his role in the espionage that shared classified military secrets with the world. Ethel was arrested shortly after, outside of a courthouse and charged.

The Rosenbergs’ trial began on March 6, 1951 and was shrouded in controversy, as it remains to this day. Throughout the brief trial, the Rosenbergs resolutely professed their innocence. The prosecution’s case relied heavily on the testimony of Ethel’s brother, David Greenglass. Originally, Greenglass stated that his sister had no role in the conspiracy. However, he later changed his story to implicate his sister, claiming she had typed notes of the classified documents, in exchange for his wife’s immunity. Years later, Greenglass openly admitted that he believed his wife to be the one who actually typed the notes, not his sister Ethel, and he had implicated her only to protect himself and his wife.

Throughout the trial, the Rosenbergs frequently invoked the fifth amendment, their right to not implicate themselves, and as a result refused to answer many questions. They also refused to name any other conspirators as part of their claims of innocence. At the time of the trial, McCarthyism was rampant in America, and refusal to answer questions, to many, implied guilt. People were fearful of Communism and even more fearful of it coming to America.

On March 29, 1951 the Rosenbergs were found guilty, a few days later on April 5, 1951, both Julius and Ethel were condemned to death by electric chair. They immediately began the appeals process.

Public protests ensued and even the international community became involved in the Rosenbergs’ case. Many felt that death was too great a sentence for their espionage crimes. In fact the case had been almost non-existent against Ethel, until her brother changed his sworn testimony in exchange for clemency.

Edgar Hoover was extremely opposed to the trial of Ethel, as he thought it would reflect badly on the FBI to try and execute a young mother of two children ages 6 and 10 at the time. Albert Einstein also spoke out in support of the couple, calling for mercy from the US government, as did Pope Pius XII. However, their efforts were futile. Presidents Harry Truman and Dwight D. Eisenhower both denied the Rosenbergs mercy and the last minute stays of execution were denied.

President Eisenhower issued a statement declining to invoke executive clemency for the pair. He stated, “I can only say that, by immeasurably increasing the chances of atomic war, the Rosenbergs may have condemned to death tens of millions of innocent people all over the world. The execution of two human beings is a grave matter. But even graver is the thought of the millions of dead whose deaths may be directly attributable to what these spies have done.”

Julius and Ethel Rosenberg were executed at Sing Sing prison in New York on June 19, 1953.